This is a guide is for international students who wish to undertake Postgraduate (Masters, Research and PhD) studies in Canada. If you wish to further your studies in Canada, then there are some things to know about studying in Canada which we will cover on this page.

Since 2004, Canada has been ranked amongst the top 10 countries in the Quality of Life Index by the United Nations. Canada is known for its excellent educational institutions, multiplicity of top quality education programs in various streams and an innovative economy that favours international students. 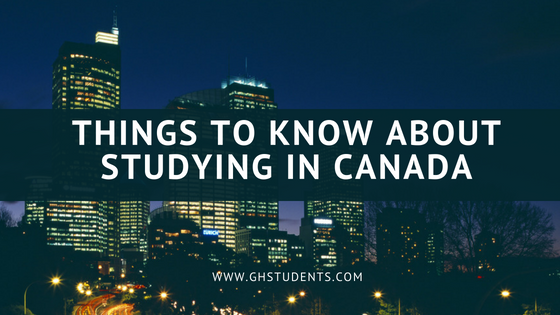 Canada is one of the safest countries for pursuing education. The country is bilingual with easy access to education and affordable living, a reason thousands of international students flock each year to study in Canada.

Reasons Why You Should Study in Canada

Canada has a high academic standard and rigorous quality controls which means a candidate will be gaining a top research skill and quality education that will be beneficial in the long run. The Organization for Economic Cooperation and Development (OECD) ranks Canada Number 1 for its achievements in higher education.

A Canadian degree, diploma, certificate is globally recognized as being equivalent to those obtained from the United States, UK and other European countries.

A good number of Canadian universities are involved in international research partnerships to study and address major world issues.

Another important reason for studying in Canada is the “Walk Safe” programs that help people access public transportation during late hours.

The Canadian higher education is the sole responsibility of provincial and territorial governments. In each province and territory, there are laws and policies governing the operation of post-secondary institutions.

In Canada, Postgraduate degrees last between one and three years. Masters degree program usually lasts for one year while PhD program last for three to five years.

How to Apply for Masters Program in Canada

If you want to further your studies in Canada for Master degree program, you will need to apply one year before the start date. Application for September intake starts by March. However, if you are applying for a popular or a research-based course, applying earlier boost your chances of gaining admission. There is also a second intake usually in January or February of each year.

There are two major requirements for international students applying to study in Canada; Language Proficiency and Sufficient Finances. Two major languages are spoken in Canada; English and French. The official language in the Québec province is French. Canadian universities offer courses in both languages. If you are not a native speaker, you will need to submit proof of proficiency in the language you intend to study in.

How to apply for PhD Program in Canada

PhD admission process in Canadian Universities differs depending on the Institution. However, there are some fundamental steps to take to apply for a PhD program. As an international student, you must decide on the PhD course you will like to apply for, identify your supervisor and chosen research topic. You may be required to write a personal statement outlining what you want to research.

You will need to apply online, providing the necessary documents including Language Proficiency results. Also, some Canadian universities may also need you to attend an admission interview.

Once accepted, proceed to apply for Canada study permit, which serves as your student visa for study. Check your university’s website for orientation advice.

A study permit is not needed for short-term courses or programs of study that is six months or less. A student may enrol in short-term programs at any learning institution, regardless of whether or not it is designated.

If you are studying in Canada for a period longer than six months, you’ll need to apply for a Canadian study permit. The study permit acts like your visa for the duration of your study. Depending on your nationality, you may need to obtain a temporary residence permit. This can be processed at the same time as your study permit application.

The average tuition fees in Canada are less expensive compared to other major study destinations (the US, UK and Australia), but still higher than most other countries.

Average tuition fees for a postgraduate degree program in Canada vary but are often between CA$10000 – $15000. Medicine and other research-related courses are more expensive.

Working and Living in Canada

Universities in Canada and their Locations

Below are some well-known universities in Canada which provide graduate /research-based degrees to international students.