Map of Ghana showing the sixteen (16) regions and their capital cities. Ghana is a country in West Africa with sixteen regions. Prior to now, there were only ten regions in Ghana, but the government has created an additional six regions.

So, in this post, we’ll be looking at the Map of Ghana showing the 16 regions. This also includes their capital cities and other landmarks in each region.

Map of Ghana Showing the 16 Regions 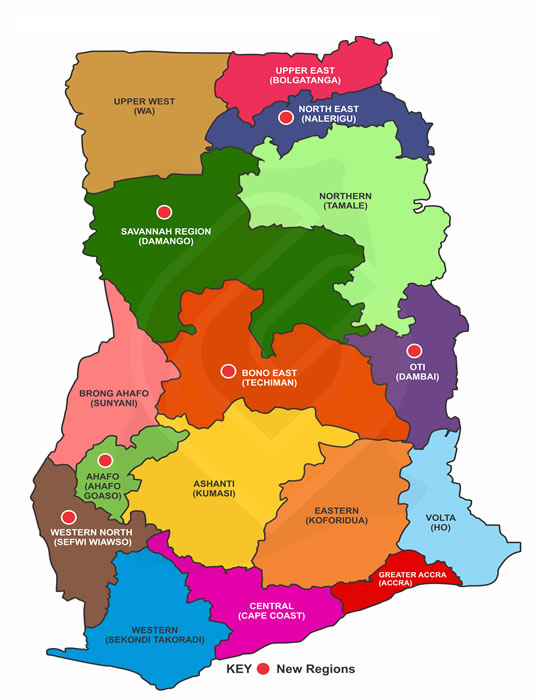 Following the successful presentations of the Constitutional Instruments (CI) the number of administrative regions in Ghana has finally increased from 10 to 16. The newly created regions are Oti, Western North, North East, Ahafo, Savannah and Bono East Regions.

All the newly created administrative regions in Ghana can be seen from the map above.

The six new regions of Ghana were created out of the Brong Ahafo, Northern, Western and Volta Regions. So we’ll be taking a look at the 16 regions in Ghana and their capital cities.

16 Ghana Regions and Their Capital Cities

The Captial of the Greater Accra Region is Accra. it is also the seat of power. It is the most populated region in Ghana with a population of 4, 010, 054. In addition, the region has 16 districts.

The Capital of the Central Region is Cape Coast. The region has a population of 2,201,863. In addition, the region has 17 districts.

The Capital of the Eastern Region is Koforidua. The Eastern region is made up of 26 districts with a population of 2,633,154.

The Capital of the Upper East Region is Bolgatanga. It is the 2nd smallest region in Ghana. The Upper Northern Region has 13 districts with a total of population of 1,046,545.

The Capital of the Upper West Region is Wa. The region has 11 districts with a total population of 702,110. Among all the regions Ghana, the Upper West has the modest number of inhabitants.

The Capital of the Volta Region is Ho. It is one of the regions in Ghana that are multi-ethnic and multilingual.

The Capital of Bono (formerly Brong Ahafo) Region is Sunyani. Prior to the fomation of Bono East and Ahafo region, the Bono region used to be the 2nd largest region in Ghana.

The Capital of the Oti region is Dambai. The region was carved out of the northern part of the Volta region. It has a total of 8 districts.

The Ahafo region is one of the two regions carved out of Brong Ahafo region with its capital being Goaso. It is made up of 7 districts. 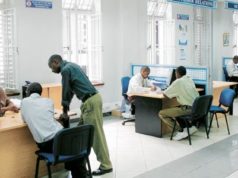 How to Open a Bank Account in Ghana as a Foreigner