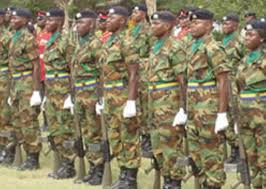 The Ghana Army Salary just like every other military organization in the world has an organized chain of command. They have the enlisted and the officers. In some other context, these ranks could be divided into commissioned and non-commissioned officers.

The Ghana Army conducts its recruitment exercise on yearly basis, and as such a lot of search queries have been submitted with regards to Ghana Army Salary Structure and Scale.

Some of them include;

We will try as much as we can to address some of these queries in this article. However, before we go deeply into GA salary structure, let’s find out more about Ghana Army Rank Structure..

As earlier mentioned, the Ghana Army is divided into two categories, the Officers, and Enlisted Officers.

The Officers:  are the managers, problem solvers, key influencers and planners who lead Enlisted Soldiers in all situations. are responsible for leading and training enlisted.

Enlisted Officers: is a military officer who is given authority by an officer, but he or she is not technically considered to be in command. 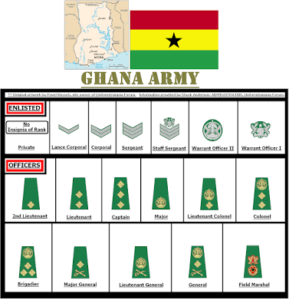 The GA rank structure has an organized chain of command that is similar to the British army ranks structure, they are arranged in descending order:

The Ghana army has 10 ranks for officers which General is the highest rank among and Second Lieutenant is the lowest rank. Below is the complete list of GA commissioned officers ranks:

There are 9 ranks in the Ghana Army for Enlisted officers. They are listed below:

The Salary of the Ghana Army is not made public, but from the resources, we gathered, the least ranking officer in the Ghana Army takes home 1000GHC per month.

Disclaimer: The figure quoted on this page is yet to be verified, if you have a more concrete figure, please let us know in the comment section.

Best Place to Sit in an Examination Hall

For Students from Ghana – A Guide to USA University Admission Writing

How to Apply and Renew for Ghana Passport Online